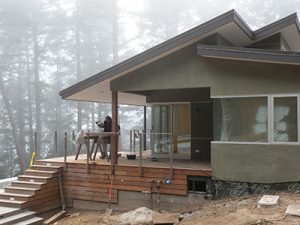 Ordinarily, designing a weekend getaway home would be easy work for architect Judith Mattingly. But building a home in the middle of an undeveloped tract of land in the Santa Cruz mountains proved to be a challenge.

To turn the family cabin into a reality, Mattingly and custom builder John Merwin would have to create the infrastructure for the home from scratch, including a well, septic tank, propane tank, photovoltaics, and even road improvements to satisfy the fire marshal.

First Things First
Without a power source, there’s no construction. Mattingly could have used diesel generators to get started, but she and Merwin opted to install a photovoltaic (PV) array to power the construction. They designed a shed to house the equipment, which included six inverters, 24 batteries, a 30-kw back-up generator and a 14-kw system.

Mattingly had worked on projects utilizing solar electric systems before, they were all grid-tied. This was different. “Since we had no electricity grid to fall back on,” she explains, “we had to carefully calculate all of the anticipated loads for the house in order to size the system properly. And we had to size a large battery array to store up power for night time use.”

Because the site was so remote (it took Merwin and his team of workers 40 minutes on winding roads to get to the site from his office), there was no phone or internet service available. An antenna was installed to connect with a distant tower to provide internet, and a micro cell was added to improve cell phone reception.

Minimizing Impact
“With an undeveloped site, you need to prove there are enough natural resources to support the project,” explains Mattingly. “At every step along the way, we had to work to minimize the impact of this project to protect the natural environment.”

The potential impacts were numerous—ranging from erosion control and tree removal, to grading and site drainage, to protection of natural species, to providing adequate fire protection and emergency vehicle access.

As it turns out, the worksite was ideal habitat for a number of protected plant and animal species, so biologists were enlisted to survey the area of construction. “We had to work the construction schedule around the roosting period for a number of birds and bats,” says Mattingly. “We also ended up building some temporary housing for arboreal woodrats that were going to be disturbed by construction.” They jokingly called it “woodrat tract housing.”

Challenges & Solutions
“A fair amount of time was spent in design and specifications with the architect and with the County,” explains Merwin, owner of Dimensional Construction. San Mateo County requires that 10% of materials be from within 50 miles. So architect and builder spent many hours tracking down the origins of their building materials and found some inventive solutions along the way:

The home design took its cues from the natural slope of the property site to terrace the house in three levels, giving most rooms a view of the forest. Mattingly designed a large deck off the back of the house that’s one story up in the air. “When you sit out there, you really feel you are projected out into the tree canopy,” she says. 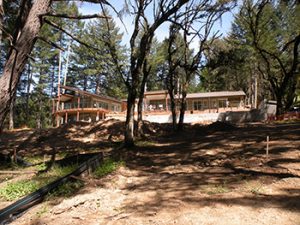 Special Design Considerations
Because La Honda is in a high severity fire zone, the house was constructed using durable and fire-resistant materials, including stucco walls, IPE decks, a metal roof, and integrally colored concrete patios. And since the home requires its own water tank for fire suppression, it is supplied with a 520-foot-deep well with 15,000 gallons of water storage (10,000 for fire).

To reduce reliance on electricity for heating and cooling, the home’s floors were constructed entirely of concrete, and—combined with south and west facing glass windows—they act as good heat sinks. Additionally, the roof has deep overhangs to prevent the floors from soaking up too much heat in the summer, and the angle of the roof channels prevailing winds for natural ventilation.

“We tried to make the house perform well passively to conserve our limited resources,” says Mattingly.

To further reduce energy use, the walls and roof are filled with foam insulation, and all the doors and windows use thermally broken aluminum to prevent heat loss.

A GreenPoint Rater herself, Mattingly has a keen understanding of the certification system. She worked closely with GreenPoint Raters Andy Llora and Randy Chaffey from the beginning of the project to maximize the number of the points the home might be able to achieve. The home achieved GreenPoint Rated Gold in October 2015.

Lessons & Rewards
“We are only as good as our help,” says Merwin, who says that while an off-grid system is not overly complicated, the technology that ties into it is. “Not only is an exceptional PV subcontractor needed, but having an exceptional electrician made all of the difference in the world, as this was the most complex part of the project.” He says having an architect like Mattingly, who’s well organized and open to discussing alternative methods for building helps, too.

As many challenges as the remoteness of the project presented, Merwin says his favorite part of the job was being in the middle of the forest with no distractions.

We envision a healthy housing ecosystem that fosters well-being in individuals, communities and bioregions.