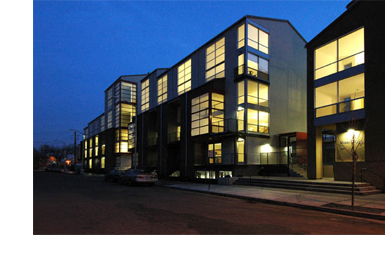 The quiet beachfront community of Hermosa Beach is getting noticed as an up-and-coming destination for green building in Southern California, and the arrival of South Bay developer Fred Koch is a case in point.

Koch is building a duplex that is exceptional not only for its energy efficiency and sweeping ocean views, but for its ground-breaking green certification in Hermosa Beach. The property is the first to take advantage of a city incentive that awards a 50% rebate on building plan check fees for achieving a green building certification. No other city in the South Bay offers such an incentive, but no developer has taken advantage of it before Koch.

GreenPoint Rated Certification
“Hermosa Beach is leading the way for other cities,” says Koch. “The city both values and incentivizes green building. It’s walking the walk and talking the talk.”

Koch’s dramatic new residence will achieve the GreenPoint Rated certification for its all-around excellence in energy efficiency, water and resource conservation, indoor air quality, and community siting. Koch is a big fan of the GreenPoint Rated system. “It’s the most user friendly system for both the end user and the builder,” he says, adding that GreenPoint Rated is tailored for California-related issues and requirements to move the industry above California code in a way that other certification systems are not.

Koch designed the Hermosa Beach project with Kevin Stringfield of Robert C. Stringfield Architects, with whom he worked on a green home in nearby Redondo Beach. Koch and Stringfield evaluate each component of the house and determine what energy efficient features represent the best value for the customer.

“To optimize the view of the ocean, the living areas were placed on the second floor with wrap-around decks and glass doors,” says Stringfield. But, as most builders know, glass is an energy-efficiency liability: Large amounts of glazing and lack of insulation lead to heat loss, as well as increased solar heat.

“These doors — and how they are arranged along the west and south sides — became the most important aspect of the building in terms of design, structure and climate control.” Koch and Stringfield minimized heat gain by adding appropriately sized overhangs above the doors. They also reduced the size of the doors from the original design to increase the insulation along the walls and allow room for the required structure.

“The prevailing wind is from the west, and having such a large amount of operable windows and doors facing that direction allows the occupants to passively cool the house,” explains Stringfield.

Sustainable Materials
While the wraparound deck was particular to the Hermosa Beach property, other energy efficient features are part and parcel of Koch’s buildings.For example:

“This project fits nicely into the personality of what Hermosa Beach residents want: clean, safe, healthy homes,” explains Koch. “It’s a population that’s going to appreciate what we’re doing. They have a passion for these features more than other folks in other cities.” Kudos to Stringfield and Koch for going beyond the minimum code requirements, for earning a GreenPoint Rated certification and for understanding the benefits of building green.

Build It Green connects changemakers to transform the housing system in service of human and ecological vitality.